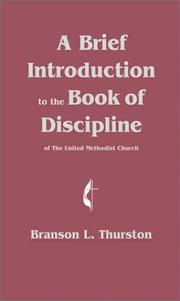 A Brief Introduction to the Book of Discipline of the United Methodist Church Prepack of 10 by Branson L. Thurston